Your basket is currently empty!

The SAH-1 is the result of the incredible efforts, and tenacity, of a small Cornish team working from a clean sheet to design the perfect aerobatic primary training aircraft. 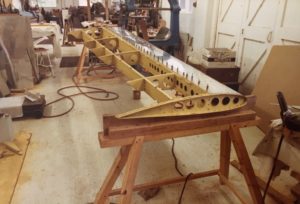 The story began in 1977 after the successful Cornish business man, Mike Robertson of Trago Mills, bankrolled the design from scratch. After placing a full-page advert in Flight International magazine, Mike recruited aeronautical engineer Sydney Arthur Holloway to take on the challenge. 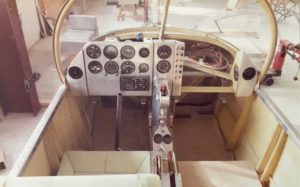 Mike was disappointed that there were no longer any light training aircraft produced in Britain, and found the ubiquitous American aircraft to be rather dull and underwhelming. Syd’s task was to create a modern machine with simple construction and delightful handling and performance. A modern day Chipmunk perhaps…

After creating a purpose built design and production site on a hill top airfield on Bodmin moor, work began on the new machine.

Syd used his extensive contact list gained from a lifetime of aeronautical engineering to bring together a team of motivated and skilled individuals. His wife was involved as draughts-person, his son Alan was also heavily involved, along with a list of notable individuals all keen to play their part. The highly decorated Air Vice Marshal Geoffrey Cairns completed the line up as chief test pilot. 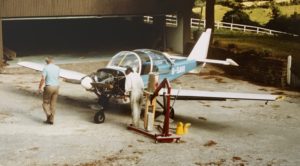 Funded by the Trago Mills shopping empire it was all systems go.

Around six years later the prototype SAH-1, registered G-SAHI, took to the skies from Bodmin on 23 August 1983. It was an incredible success, and flew beautifully right away.

There then embarked a concentrated period of testing and certification, culminating in the SAH-1 being issued with Full aerobatic UK certificate of airworthiness and well on the way to production.

The aircraft was very well received by the aviation industry and embarked on a very busy programme of public relations and show attendances. She appeared at several major airshows including Farnborough and  Dubai. The feedback was universally excellent and the future looked bright. 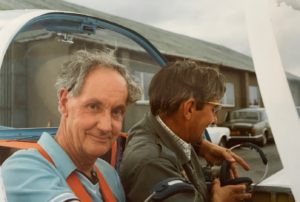 It was soon clear that the design would be very suitable as a military and civilian primary trainer, and focus was placed on submitting a bid for the military tender process. Despite the best efforts of the team, the operation was considered too small to be able to quickly achieve the necessary production capacity needed for the military requirements. The contract was lost to the Slingsby T67 Firefly.

A huge blow to the team, but they persevered with getting the design ready for production for the civilian flying school and private owner market. 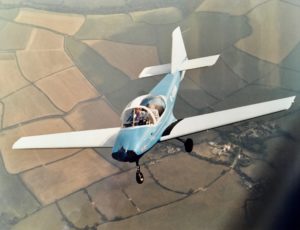 After several years of ever spiralling development costs it was becoming a strain on the Trago Mills finances. Additional backing was sought, but proved difficult to achieve with the UK in recession. 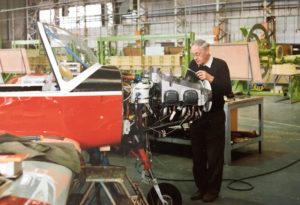 Finally Trago Mills reached the limit of their funding, and the project looked to be over with just the single aircraft produced, until Danish company FLS Aerospace stepped in. FLS were looking to add light aircraft manufacturing to their company portfolio and bought up the rights to the SAH-1 and the Optica aircraft. 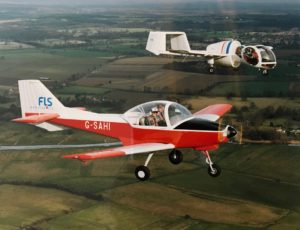 Pushing on with development, and still with the assistance and consultancy of Syd Holloway, FLS moved forward with a plan for two variants of the design. The Club Sprint with 118 hp engine, and the closest to the original Trago design, and the Sprint 160 which would be higher powered and aimed at the military market. The original Trago airframe G-SAHI was used throughout the process, and was fitted with a variety of power plants and modifications as the design was developed. 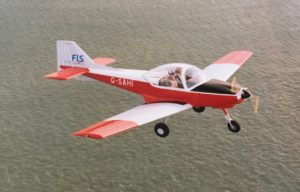 Once again finances eventually proved tricky. After a further failure to achieve a military contract for the UK JEFTS tender, losing to the Grob 115, it was the end of the line once again. FLS dropped the design after having produced a couple of airworthy Sprint airframes, and several that were unfinished. Game over.

The SAH-1 design was largely forgotten, with SAHI and the finished Sprints remaining airworthy in private hands, but not subject to any further development.

SAHI flew occasionally and was used as a film prop in the mid 2000’s, but her flying days seemed to be over when struck by a ground vehicle whilst stored at North Weald. The damage to the rear of the aircraft was significant and seemed to be beyond economic repair. However a lifeline was thrown when she was spotted by a RAF doctor, who recognised her for what she was. He made enquiries, and after checking with the Popular Flying Association (now LAA) that she could fly on a less restrictive Permit To Fly, made an offer to purchase.

The deal was done, and SAHI had another hope of once again returning to the skies!

A period of repair and refurbishment took place and SAHI looked better than ever. She flew with a syndicate of three pilots for the next fifteen years, based at RAF Henlow.

With Henlow due to be closed in 2020 the trio decided it was time to part with SAHI and she was put up for sale.

Paul Gibbs was in the process of selling the Aerial Vocations Extra 230 and looking for a new direction. Having known about the SAH-1 since he was a very young Air Cadet he knew he had to go and see her.

After a successful pre-purchase inspection and subsequent negotiation Aerial Vocations ltd bought SAHI and moved her North to her new base, Inverness Airport (INV:EGPE) where she would be used to give cost sharing air experience flights to all who wanted one.

SAHI has never been in better fettle than she currently is, and is now a much loved and cherished piece of British aeronautical history. She catches attention wherever she goes, and still recognised by the older generation. Younger enthusiasts are brought in to the SAHI story with airshow attendances and an ‘always open’ cockpit policy.

Further ideas are under development to keep SAHI in the air, and continuing with the dream so skilfully achieved by Syd Holloway and his small team in the 1980’s on Bodmin Moor. 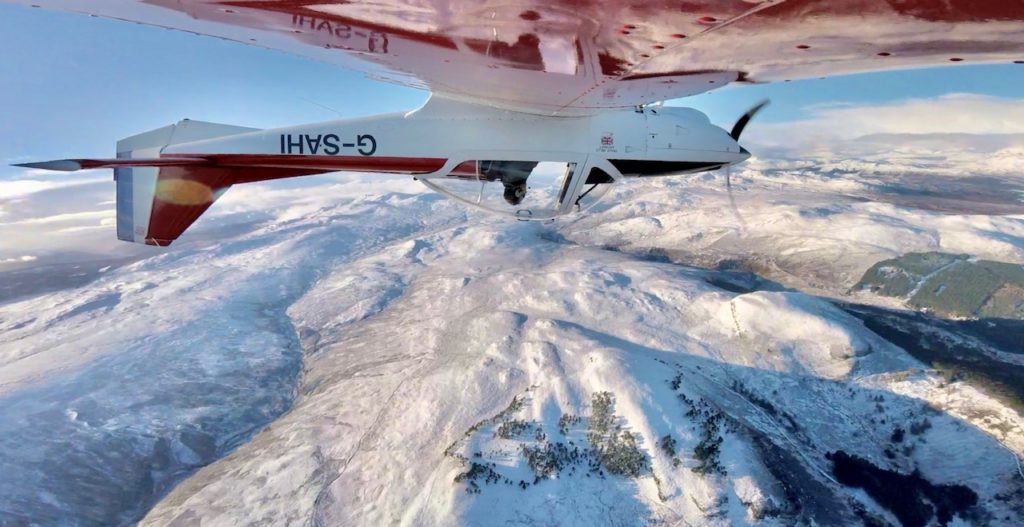 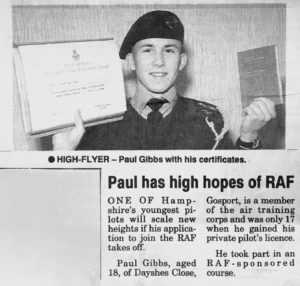 Paul was born in Portsmouth in 1973 and wanted to be a pilot from a very early age. He grew up in Gosport on the South coast of England. The skies were seemingly filled with aeroplanes and helicopters mostly associated with the Royal Navy, and he spent most of his school days looking across the fence at the adjacent base HMS Daedalus, now Solent airport. 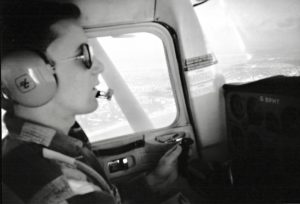 After enjoying membership of Air Scouts, Air Training Corps and the local gliding club he was awarded a Royal Air Force Flying Scholarship at the age of 17.

He completed this training on PA38 Tomahawks and went on to finish the private pilots licence, before being very fortunate to win a fully-sponsored placement as commercial pilot trainee with Air Atlantique, Coventry in the summer of 1995. 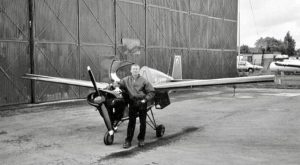 After nine months of concentrated training his career began with the issue of a Basic Commercial Pilots Licence (BCPL) flying the BN2 Islander on Coastguard patrol along the Dover straights. He was fortunate to fly much of the Air Atlantique varied fleet including Cessna 310 and 400 series twins, F406 turboprop and the mighty Douglas DC6 heavy piston cargo aircraft.

It was around this time that he achieved a lifelong ambition to own his own aircraft, buying Tipsy Nipper Mk3 G-NIPR which is still owned today. This allowed him to enjoy his passion for aerobatics at very low operating cost.

A transfer to the sister company Highland Airways in 2000 led to relocation to Inverness in Scotland. This brought his first multi-crew command on the Jetstream 31 type, and subsequently he became a training captain on the same. 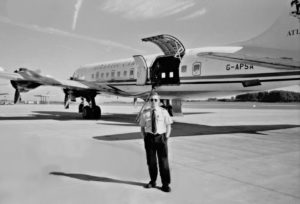 With the birth of their first child Paul took the tough decision to switch to the more stable roster pattern of scheduled airline flying and he joined Flybe as a Bombardier Q400 captain, later moving on to the Embraer 175/195 jet, again as direct entry captain. 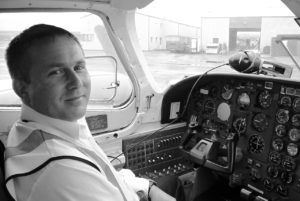 Sadly this was a short lived position due to major company restructure, and redundancy soon loomed. It was at this point that Paul took the big step of switching to contract flying and set up his own company Aerial Vocations ltd. He then worked on contract to a Chinese airline for the next six years, continuing to fly the Embraer E-Jet. The success of this contract enabled Aerial Vocations to purchase an Extra 230 with the intention of starting a small scale aerobatic display business. 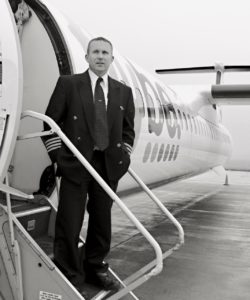 The COVID pandemic brought this incredible Far East adventure to an end and Paul returned to Scotland, being fortunate to secure his present position of flying the F406 on contract to the Scottish government, flying Maritime patrol duties. 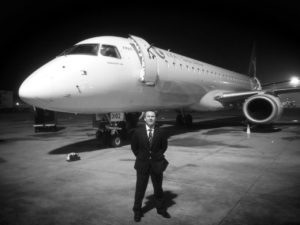 Sadly the pandemic also put paid to the aerobatic display business development with the loss of any sponsorship opportunities. The difficult but sensible decision was made to sell the company Extra 230… 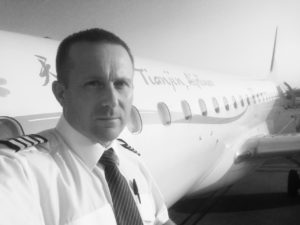 Within weeks of the Extra being sold, G-SAHI appeared on the market. As this aircraft was so well known to Paul from his childhood holidays in Cornwall, and as a teenage Air Cadet assisting at Farnborough Airshow, it seemed like fate that he would go on to own it! SAHI was purchased in April 2020 and is currently being used to give Air Experience flights to as many people as possible including some with disabilities or life limiting conditions. This is an entirely non-profit making venture, and done for the love of flying. 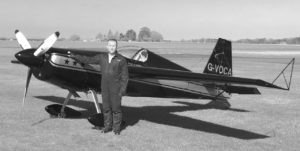 Paul is now approaching his 15,000th flying hour and currently enjoying the role of type rating instructor with AirTask group based at Inverness, as well as regularly flying SAHI and NIPR. 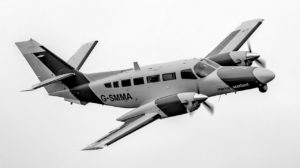 He is delighted to be able to share his love of flying with others, and seeing the same delight on their faces as he has had throughout his flying life. 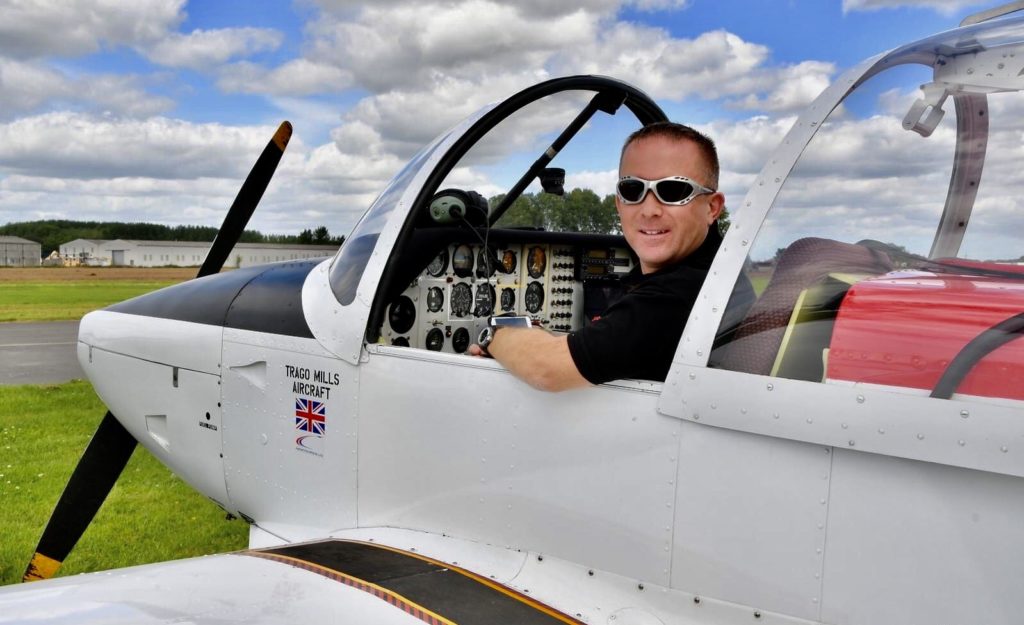